There are several ways to preserve food.  This is gives basic information on different methods that have been used for years to preserve food for longer storage and storage without the use of refrigeration. 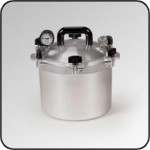 Processing Food in jars can extend the life of your garden harvest.

Canning – A method of preserving food in which the food is processed and sealed in an airtight container.

This method of packaging and preserving prevents microorganisms from entering and proliferating inside. For example, the microorganism Clostridium botulinum (which causes botulism), can only be eliminated at temperatures above the boiling point.

From a public safety point of view, foods with low acidity (a pH more than 4.6) need sterilization under high temperature (116-130 °C).

To achieve temperatures above the boiling point requires the use of a pressure canner.

Foods that must be pressure canned include most vegetables, meat, seafood, poultry, and dairy products. The only foods that may be safely canned in an ordinary boiling water bath are highly acidic ones with a pH below 4.6, such as fruits, pickled vegetables, or other foods to which acidic additives have been added.

Canning provides a shelf life typically ranging from one to five years.

Freezing food is a great way to preserve food!

Freezing – The process of chilling foods to at least 0°F.  It can be used with all foods, including fruits, vegetables, meats, seafood, grains, nuts, dairy, eggs, and prepared foods. True freezing is not possible in the freezer compartment of your refrigerator where the temperature is typically much warmer, between 10°F to 32°F. Freezing is easy to do, if you can afford to buy and operate the relatively expensive appliance. 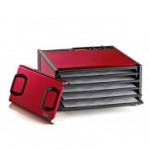 Drying or Dehydrating – The process of removing moisture from foods until microbial activity cannot be supported. This method of preserving can be used for most foods, including fruits, vegetables, meats, seafood, grains, legumes, and nuts.  There are several different techniques; some are relatively easy however to achieve a higher quality and better results some special equipment may be necessary.

Fermenting is a method of preserving food.

Fermenting – The process of encouraging the growth of “good bugs” to inhibit the “bad bugs” that can spoil food. It can be used with many types of foods, including fruits, vegetables, meats, seafood, grains, legumes, dairy, and eggs to produce a wide range of products such as wine (from grapes), sauerkraut (cabbage), cured sausage (meat), and yogurt (milk). Many fermented products can be produced without any special equipment. The method for each type of product is relatively easy, but requires attention to detail.

Preserve your food by pickling.

Pickling – The process of soaking food in a solution containing salt, acid, or alcohol. It can be used with most foods, including fruits, vegetables, meats, seafood, legumes, and eggs. Most methods require no special equipment. However, pickled foods can be unsafe if prepared carelessly or stored at room temperature. Pickling is often combined with another method, such as fermenting, canning, or just refrigerating.

Many people familiar with the technique consider salted vegetables such as green beans to be far superior in taste and texture than canned or frozen beans.  This old-fashioned method was promoted in the early twentieth century as an alternative to canning, in order to conserve glass, tin, and fuel in time of war.

Curing – Similar to pickling, and uses salt, acid, and/or nitrites. It is used for meat and fish.

Simple, modern curing methods often reduce the amount of salt and nitrites, which may require that you refrigerate or freeze the final product. Shelf-stable products require the use of adequate amounts of nitrites and a complex drying process using special equipment and exacting technique. Some curing methods also employ a secondary process such as fermenting, smoking, or sealing.

Salt inhibits the growth of microorganisms by drawing water out of microbial cells through osmosis. Concentrations of salt up to 20% are required to kill most species of unwanted bacteria. Smoking, often used in the process of curing meat, adds chemicals to the surface of meat that reduce the concentration of salt required. Smoking affects the ability of bacteria to grow, inhibits oxidation (and thus rancidity), and improves flavor.

Nitrates and nitrites not only help kill bacteria, but also produce a characteristic flavor, and give meat a pink or red color. The presence of nitrates and nitrites in food is controversial due to the development of nitrosamines when the food, primarily bacon, is cooked at high temperatures.

Smoking – A complementary process to curing that improves flavor and appearance, and can also act as a drying agent. Smoked meats are less likely to turn rancid or grow mold than unsmoked meats.

Sealing  – A process of covering food to keep out air, which delays (but does not stop) the activity of spoilage organisms.  It is used primarily as a complementary process to other methods such as drying or freezing.  Both fat sealing and vacuum sealing methods are relatively easy. Vacuum sealing devices are a relatively inexpensive small appliance.

Storing food in a root cellar.

Cellaring – Process of storing foods in a temperature-, humidity-, and light-controlled environment (such as a cellar). It can be used with many foods, especially vegetables, grains, and nuts, as well as fermented foods and dry-cured meats. There are many different methods for cellaring food, all of which are relatively easy to do. Some require simple, inexpensive equipment you may already own. No matter where you live, whether in an apartment or on a farm, you can use the concept of cellaring to some degree.

$5 off your first subscription or any 6 or 12 month gift order, code: RAKFLAVOR

Our site is secure with:

We stay in compliance with:

You also have the option to use:

We Have Financing Options!